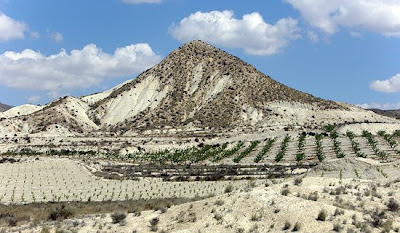 FORTUNA, Spain: Lush fields of lettuce and hothouses of tomatoes line the roads. Verdant new developments of plush pastel vacation homes beckon buyers from Britain and Germany. Golf courses - 54 of them, all built in the past decade and most in the past three years - give way to the beach. At last, this hardscrabble corner of southeast Spain is thriving.

There is only one problem with this picture of bounty: This province, Murcia, is running out of water. Spurred on by global warming and poorly planned development, swaths of southeast Spain are steadily turning into desert.

This year in Murcia farmers are fighting developers over water rights. They are fighting each other over who gets to water their crops. And in a sign of their mounting desperation, they are buying and selling water like gold on a burgeoning black market.

"Water will be the environmental issue this year," said Barbara Helferrich, spokeswoman for the European Union's Environment Directorate. "The problem is urgent and immediate."

"If you're already having water shortages in spring, you know it's going to be a really bad summer."

Southern Spain has long been plagued by cyclical drought, but the current crisis reflects a permanent climate change brought on by global warming and it is a harbinger of a new kind of conflict, climate scientists say.

The battles of yesterday were fought over land, they warn. Those of the present center on oil. But those of the future, a future made hotter and dryer by climate change in much of the world, will focus on a much more basic resource: water.

Dozens of world leaders are meeting at the United Nations Food and Agriculture Organization in Rome starting Tuesday to address a global food crisis caused in part by water shortages - in Africa, Australia and here in southern Spain.

Climate change means that creeping deserts may eventually drive 135 million people off their land, the United Nations estimates. Most of them are in the developing world. But southern Europe is experiencing the problem now, its climate drying to the point that it is becoming more like Saharan Africa's, scientists say.

For Murcia, the water crisis has come already. And its arrival has been accelerated by developers and farmers who have hewed to water-hungry ventures hugely unsuited to a dryer, warmer climate: crops like lettuce that need ample irrigation; resorts that promise a swimming pool in the backyard; acres of freshly sodded golf courses that sop up millions of gallons a day.

"I come under a lot of pressure to release water from farmers and also from developers," said Antonio Pérez Gracia, Fortuna's water manager, sipping coffee with farmers in a bar in the town's dusty square on a recent morning. He rued the fact that he can now provide each family with only 30 percent of its water allotment.

Ruben Vives, a farmer who relies on Pérez's largess, said he could not afford current black market water prices.

"This year, my livelihood is in danger," said Vives, who has farmed low-water crops like lemons here for nearly two decades.

The thousands of wells - most of them illegal - that have in the past temporarily quenched thirst have depleted underground water so much, so fast, that soon pumps will not reach it. Water from northern Spain that was once transferred here has slowed to a trickle, because wetter northern provinces are drying up, too.

The scramble for water has set off scandals. Local officials are in prison for taking payoffs to grant building permits in places where water is inadequate. Chema Gil, a journalist who exposed one such scheme, has been subject to death threats, carries pepper spray and is guarded day and night by the Guardia Civil, Spain's military police force.

"The model of Murcia is completely unsustainable," Gil said. "We consume two and a half times more water than the system can recover. So where do you get it? Import it from elsewhere? Dry up the aquifer? With climate change we're heading into a cul-de-sac. All the water we're using to water lettuce and golf courses will be needed just to drink."

Facing a national crisis, Spain has become something of an unwitting laboratory, sponsoring a European conference on water issues this summer and announcing this year a national action plan to fight desertification. That plan includes a shift to more efficient methods of irrigation and an extensive program of desalinization plants to provide the fresh water than nature does not.

The Spanish Environment Ministry estimates that a third of the country is at risk of turning into desert from a combination of climate change and poor land use.

Still, national officials visibly stiffen when asked about the "Africanization" of Spain's climate - a term now common among scientists.

"We are in much better shape than Africa, but within the EU our situation is serious," said Antonio Serrano Rodríguez, secretary general for land and biodiversity at Spain's Environment Ministry.

Still, Serrano and others acknowledge the broad outlines of the problem. "There will be places that can't be farmed any more, that were marginal and are now useless," Serrano said. "We have parts of the country that are close to the limit." Average surface temperature in Spain has risen 1.5 degrees Celsius (nearly 3 degrees Fahrenheit) compared with 0.8 degrees globally since 1880, temperature records show. Rainfall here is expected to decrease 20 percent by 2020, and 40 percent by 2070, according to United Nations projections.

The changes on the Almarcha family farm in Abanilla over the past three decades are a testament to that hotter, dryer climate here. Until two decades ago, the farm grew wheat and barley watered only by rain. As rainfall dropped, Carlo Almarcha, now 51, switched to growing almonds.

About 10 years ago, he quit almonds and changed to organic peaches and pears, "since they need less water," he explained. Recently he took up olives and figs, "which resist drought and are less sensitive to weather."

Almarcha participates in an official water trading system, started last year, in which farmers pay three times the normal price - 33 cents instead of 12 per cubic meter, or 35 cubic feet - to get extra water. The black market rate is even higher. Still, his outlook is bleak.

"You used to know this week in spring there will be rain," he said, standing in his work boots on parched soil of an olive grove that was once a wheat field. "Now you never know when or if it will come. Also there's no winter any more and plants need cold to rest. So there's less growth. Sometimes none. Even plants all seem confused."

While Almarcha has gradually moved toward less thirsty crops, many farmers have gone in the opposite direction. Encouraged by the government's previous water transfer schemes, they have shifted to producing a wide range of water-hungry fruits and vegetables that had never been grown in the south. Murcia is traditionally known for figs and date palms.

"You can't grow strawberries naturally in Huelva - it's too hot," said Raquél Montón, a climate specialist at Greenpeace in Madrid, referring to the strawberry capital of Spain. "In Sarragosa, which is a desert, we grow corn, the most water-thirsty crop. It's insane. The only thing that would be more insane is putting up casinos and golf courses."

Which, of course, Murcia has.

In 2001, a new land use law in Murcia made it far easier for local residents to sell land for resort development. Though southern Spain has long had elaborate systems for managing its relatively scarce water, today everyone, it seems, has found ways to get around them.

Grass on golf courses or surrounding villas is sometimes labeled a "crop," making owners eligible for water that would not be allocated to keep leisure space green. Foreign investors plant a few trees and call their holiday homes farms so they are eligible for irrigation water, Pérez Gracia said.

"Once a property owner's got a water allotment, he asks for a change of land use," he said. "Then he's got his property and he's got his water. It's supposed to be for irrigation, but people use it for what they want. No one knows if it goes to a swimming pool."

While he said his "heart goes out to the real farmers," he does not have the manpower to monitor how people use their allotments.

With so much money to be made, officials set aside laws and policies that might encourage sustainable development, said Gil, the journalist. At first, he was vilified in the community when he wrote articles critical of the developments. Recently, as people have discovered that the water is running out, the attitude is shifting.

But even so, people and politicians tend to regard water as limitless resource.

"Politicians think in four-year blocks, so its O.K. as long as it doesn't run out on their watch," Montón of Greenpeace said. "People think about it, but they don't really think about what happens tomorrow. They don't worry until they turn on the tap and nothing flows.